Click here to take a sneak peek at photographs from some of the Along the Appalachian Trail books.

In Memory of MacAfee of Knob 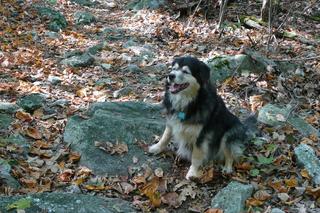 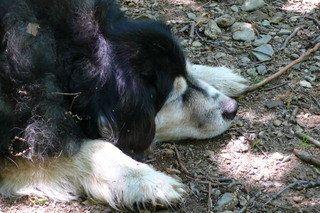 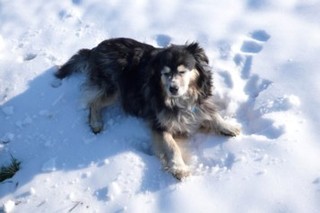 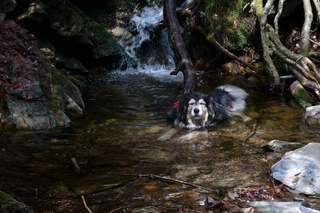 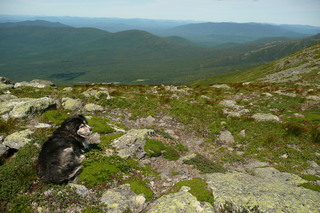 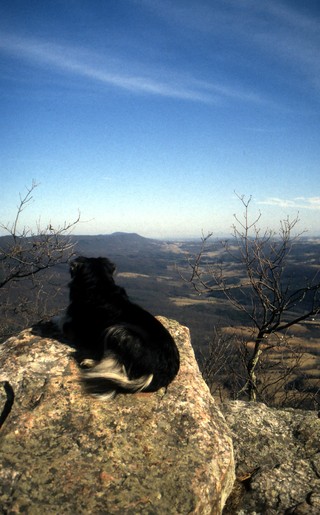 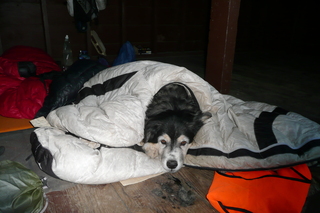 The world’s best trail companion passed away on January 7. In dogs years, MacAfee of the Knob, the Amazing Appalachian Bouncing Dog, was somewhere between 99 and 115 years old.

For more than 16 years, Mac accompanied me and Laurie on every outing we did, including his hiking the Appalachian Trail from Georgia to Maine not just once, but twice. Including all hikes he did with us, we figure his paws carried him well over 7,000 miles of varied terrain.

Mac received his nickname on one of the first hikes we took him when he was about eight months old. We came across a herd of deer that scattered upon our approach. As dogs are wont to do, Mac tried to run after them, but thick undergrowth prevented him from doing so. He stood still for a few moments and watched the deer take one short hop after another. Having seemingly learned, he took off again, no longer running, but bouncing from spot to spot, unhindered by the brushy vegetation. This became his standard way of running through the woods.

I could swear that he enjoyed the views from lofty heights as much as we did. So many times, when we were huffing and puffing to a high spot, he would run ahead of us. When we finally got to the overlook, he would not be sniffing the bushes or wandering around looking for squirrels. He’d be sitting on the edge of the precipice, peacefully looking over the scenery as if quietly appreciating the grandeur spread out before him.

Other times we would come around a bend in a trail and find him chest deep in a creek. With head down and short ears dangling, he would intently watch the fish swirling around him. His jabs into the water would always be unsuccessful—he just came up with a mouth full of water and no fish. Yet, he spent hours trawling shallow streams, and providing us with a never-ending source of entertainment. (I tried to teach him about that little phenomenon called light refraction, but he never got it.)

On a hike along the Blue Ridge Parkway, I had kept Mac on a leash as per parkway regulations, but upon coming to an open meadow I could tell he really wanted to run and enjoy the openness. I thought, “What can it hurt?” So I unclipped the leash to give him a few minutes of freedom. Lower in the meadow, I saw him drop down and roll around——in a squishy-fresh cow pie. He came back up with a big grin on his face, as if to say, “Ain’t this perfume great? I’ve been looking for something like this for a long time. Can’t wait till we get home to impress the females in the neighborhood!”

Mac’s 50-pound body cranked out a lot of heat and on cold winter campouts Laurie and I would invite him into the sleeping bag with us. On one particularly frigid night, I was happy to discover that, when gathered against my stomach, the unfurred bottoms of his paws felt like miniature heating pads.

Even when it was obvious the bladder cancer was taking its toll, Mac still insisted on accompanying us on daily walks. Until the end he had so much joy with life.

Memories such as these help me smile whenever the pangs of missing him well up. My sister, in sending me words of comfort, may have helped me the most with MacAfee of Knob’s passing, “He had a great life. He's walking the big trail in the sky and in no pain. He will always be the bouncing trail puppy.”