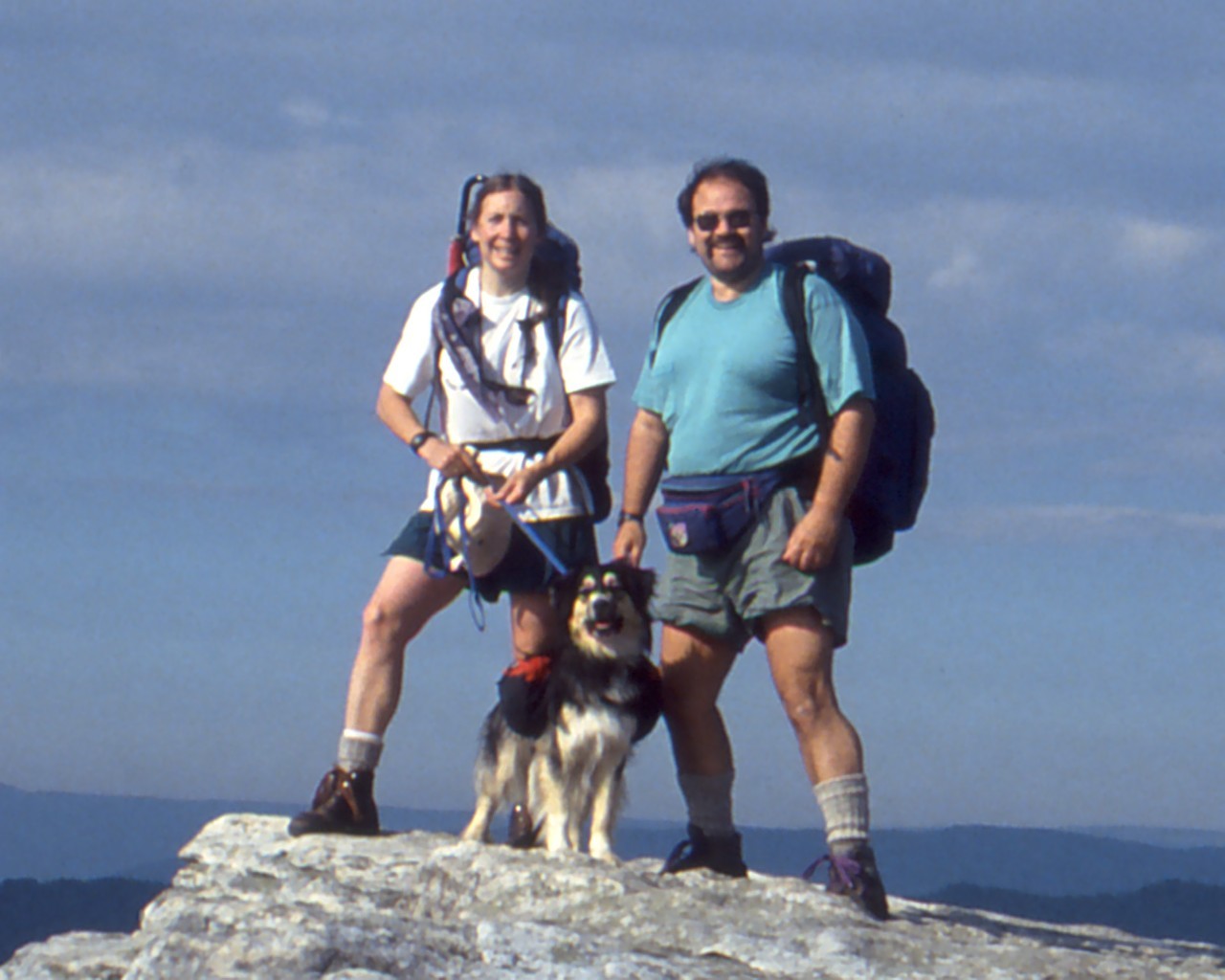 The White Mountains of New Hampshire mark a return to heights that have not been seen by northbound Appalachian Trail thru-hikers since tramping across the ridgelines along the North Carolina/Tennessee border close to 1,000 miles ago. They are also our introduction to the rigors and glories associated with hiking above treeline.

Wauchipauka Pond lies close to the base of Mount Moosilauke and Laurie, MacAfee of Knob (The Amazing Appalachian Bouncing Dog), and I didn’t pass up the chance to take an early morning swim. Yet, after ascending more than 3,500 feet in just four miles, the sun disappeared, the clouds rolled in, and the wind was almost strong enough to knock us down when we posed for the obligatory summit photo. Descending Moosilauke proved to be somewhat treacherous as we had to go down wooden steps set in vertical rock slabs along Beaver Brook. In some places there were no steps and we had to make our way as best we could along the falls of the brook.

Pathways in the Southern Appalachians employ switchbacks to ease the effort of gaining elevation. Trail builders in New England eschew the method. (One told me, “We don’t want to dilly-dally when going up or down, we just want to get there.”) As a result, our climbs and descents are now all nearly straight up and down, requiring us to use hands and feet, and great caution.

One of these straight up and down routes delivers us from 1,450-foot Franconia Notch to 4,500-foot Franconia Ridge in less than three miles, but the effort proves worthwhile as we walk above treeline with spectacular 360-degree views for the next four miles.

The Appalachian Mountain Club, one of the trail maintaining clubs that belong to the Appalachian Trail Conservancy (the umbrella organization that oversees the entire pathway), operates a system of seven huts along the A.T.’s route through the White Mountains. Costing about $90 a person to stay, the huts accommodate 36-90 people and provide bunk beds, linens, and dinner and breakfast, enabling people to hike this rugged terrain without having to carry tents, sleeping bags, stoves, and the other gear normally need when backpacking.

The huts are staffed by crews of young people, most of who are still in college or recently graduated. You can’t help but admire them , for not only do they cook all of the meals, keep the huts clean, and deal with possibly hundreds of people a day, they also make almost daily trips carrying 50-60-pound loads of food and other supplies from the lowlands to the huts.

Lakes of the Clouds Hut sits on a ridge just below Mount Washington and was a good place to rest before beginning our ascent. Washington has the worst weather in America, with the summit clouded over about 55 per cent of the time, and an average summertime high temperature of only 52 degrees. In April 1934, the world’s record on-land wind speed of 231 miles per hours raced across its flanks. Close to 150 people have died, most of them from exposure, falls, or overexertion, on the mountain.

There were signs warning us of this as we began the climb across huge boulder fields. Yet, when we reached the summit, we found that Washington has a weather observatory, a museum, a snack bar, post office, and souvenir shop. We also learned that the hordes of people milling around didn’t hike up like we did, but ascended the mountain in their own cars via the Mountain Washington Toll Road. Some didn’t even have to drive—they came up in the luxury of a cog railway car.

Leaving all of these people and facilities behind, our route brought across the Presidential Range, where we wound our way among the clouds, well above threeline for more than nine miles.

Wildlife is different here in New England, compared to what Laurie and I are used to in our home in the Southern Appalachians. The familiar “caw, caw” of crows has been replaced by the coarse “cronk” of ravens, and the timid blue jays are now out numbered by Canada jays that are so forward that they often swoop down to snatch trail mix right out of a hiker’s hand. Laurie and MacAfee have even caught glimpses of three moose.

I’m sorry to report to you that MacAfee of Knob is off the trail for a while. He is a real trooper and he kept on plugging along, following us over this rugged terrain of huge boulders, rock slabs, and precipitous heights. Yet, Laurie and I could tell that it was taxing his 14-year old body. Recognizing that the trail will not get any easier in Maine, we sent him to Virginia to stay with Laurie’s parents. He will now have 4-5 weeks to rest and relax before rejoining us on our southbound journey later this fall across the more gentle landscapes of New Jersey, Pennsylvania, Maryland, West Virginia, and Virginia.